East Peoria Green Team member Shelly Farmer and her husband Rick recently visited Reiman Gardens in Ames, Iowa to look at the sculptures made from trash collected from beaches around Bandon, Oregon.

This exhibit of larger-than-life sea creatures graphically illustrates the issue of the pollution in our oceans and waterways. Their daughter Jennifer Faraci is an artist apprentice for WashedAshore.org.

Try to visit Reiman Gardens to see this exhibit which runs till October 31, 2017. 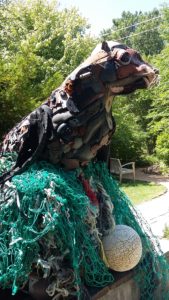 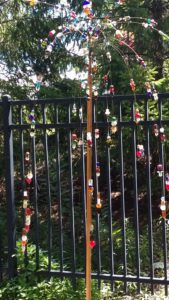 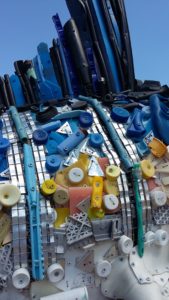 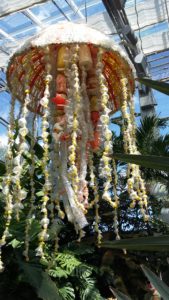 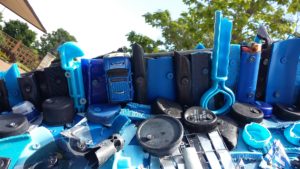 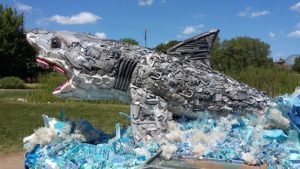 On April 28, Martin Hobbs boarded a bus chartered by the Heart of Illinois chapter of the Sierra Club. After an overnight bus ride, he arrived in Washington D.C. in time for a quick lunch before he marched down Pennsylvania. After two-and-a-half hours of marching, he boarded the chartered bus for another overnight ride, arriving back in Peoria on Sunday morning so he could return to his job as a science teacher at East Peoria High School the next day.

It is fair to assume that most working people in the United States would not consider a long march sandwiched between two overnight bus rides to be their idea of a relaxing break from the workplace. But Hobbs considers his participation in the People’s Climate March to be a weekend well spent.

“A lot of people have asked if I would do it again, and I’d do it tomorrow, if there was another one,” said Hobbs. “It was physically taxing because of those long bus rides and because they had record high temperatures in Washington Saturday. It was an exhausting walk because of the heat and humidity, but it was certainly worth it if we were able to make any difference, and educate people who don’t believe in the science of climate change.”

Hobbs was one of an estimated 200,000 people from dozens of environmental groups, Native American nations, faith communities, community organizations, schools, and labor groups who joined the large-scale activist event designed to advocate global action against climate change. A broad spectrum of American society was represented in the ranks of the marchers.  In addition to the Washington D.C. event, satellite marches took place in cities across the country.

“It was a bipartisan group,” said Hobbs. There were Republicans who favored environmental action, there were Democrats, and I’m sure there were independents. The march was ethnically diverse, and it was religiously diverse. I saw Christians of many different denominations, I saw Muslims, I saw Jews, I saw agnostics, and I saw atheists.”

Prominent marchers included former U.S. vice president Al Gore and actor Leonardo DiCaprio. The People’s Climate Movement was in overall charge of organizing the event, the fourth annual day of activism. This year’s march was the first in which Hobbs has participated.

“I felt this march was especially important because we have the most to lose, and the most steps backward to potentially take regarding climate change. I’m concerned, and a lot of the people around the country are concerned, about the potential removal of a lot of the Environmental Protection Agency’s policies, climate agreements, and clean energy plans. Those changes would have a direct impact on our climate.”

A rally followed the march, during which participants sang, chanted, and listened to guest speakers discuss issues like the importance of reducing greenhouse gas emissions and of reducing energy consumption.

“Human activity is largely responsible for the changes in climate that we’re experiencing,” said Hobbs. “That isn’t a political position, and it’s not a religious position. It’s common sense, with scientific data to back it up. One of the posters I saw on the march that really struck home with me said ‘There is No Planet B.’ This is the only planet we have, and we have to do what we can to protect it.”

East Peoria Green Team held a glass recycling event on June 3, 2017 from 8:30 to 11:30 am. This event was held at the FOLEPI parking lot in East Peoria, IL. Starting at 8:30 am, the recycling-conscious public was lining up with their bottles and jars. There was a steady flow of cars all through the morning.

East Peoria Community High School had several members of the HOPE Club on hand to unload the glass items out of trucks and cars. Elena Wolff, Clarice Wolff, Ashlea Yoder, and Lexi Dorch were a lively group and a great help to the cause. Special thanks to Martin Hobbs, Science Department Lead teacher from EPCHS, for his ongoing efforts to inspire young people and to support recycling efforts of the East Peoria Green Team.

East Peoria Green greatly appreciates the support of East Peoria City officials for supporting this event. We would also like to thank Dave Schaab, of Waste Management, for their help in putting our glass recycling events into action. Many persons dropping off glass asked when the next collection would take place.

Thanks to Linda Tiller who arrived early to set up the event and Shelly Farmer who recently joined the group. Thanks to Lori Wolff, a long-time member, who made sure that the glass was not contaminated with unrecyclable items.

Very special thanks to Bob Jorgensen whose vision lights the recycling path for all of us to follow.

The East Peoria Green Team website is www.eastpeoriagreen.com and like us on Facebook “EastPeoriaGreenTeam”, this will allow residents to follow what the group is doing or join and be a part of this group. 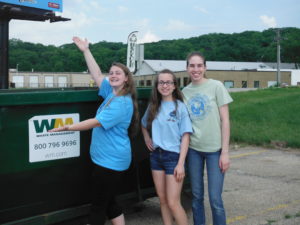 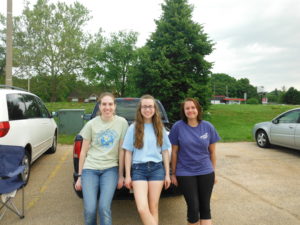 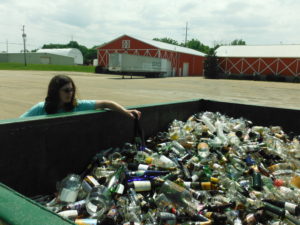 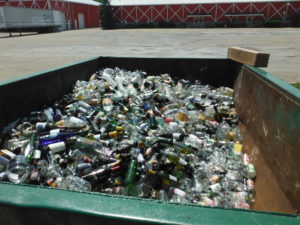