Archive for the ‘In The News’ Category

On April 28, Martin Hobbs boarded a bus chartered by the Heart of Illinois chapter of the Sierra Club. After an overnight bus ride, he arrived in Washington D.C. in time for a quick lunch before he marched down Pennsylvania. After two-and-a-half hours of marching, he boarded the chartered bus for another overnight ride, arriving back in Peoria on Sunday morning so he could return to his job as a science teacher at East Peoria High School the next day.

It is fair to assume that most working people in the United States would not consider a long march sandwiched between two overnight bus rides to be their idea of a relaxing break from the workplace. But Hobbs considers his participation in the People’s Climate March to be a weekend well spent.

“A lot of people have asked if I would do it again, and I’d do it tomorrow, if there was another one,” said Hobbs. “It was physically taxing because of those long bus rides and because they had record high temperatures in Washington Saturday. It was an exhausting walk because of the heat and humidity, but it was certainly worth it if we were able to make any difference, and educate people who don’t believe in the science of climate change.”

Hobbs was one of an estimated 200,000 people from dozens of environmental groups, Native American nations, faith communities, community organizations, schools, and labor groups who joined the large-scale activist event designed to advocate global action against climate change. A broad spectrum of American society was represented in the ranks of the marchers.  In addition to the Washington D.C. event, satellite marches took place in cities across the country.

“It was a bipartisan group,” said Hobbs. There were Republicans who favored environmental action, there were Democrats, and I’m sure there were independents. The march was ethnically diverse, and it was religiously diverse. I saw Christians of many different denominations, I saw Muslims, I saw Jews, I saw agnostics, and I saw atheists.”

Prominent marchers included former U.S. vice president Al Gore and actor Leonardo DiCaprio. The People’s Climate Movement was in overall charge of organizing the event, the fourth annual day of activism. This year’s march was the first in which Hobbs has participated.

“I felt this march was especially important because we have the most to lose, and the most steps backward to potentially take regarding climate change. I’m concerned, and a lot of the people around the country are concerned, about the potential removal of a lot of the Environmental Protection Agency’s policies, climate agreements, and clean energy plans. Those changes would have a direct impact on our climate.”

A rally followed the march, during which participants sang, chanted, and listened to guest speakers discuss issues like the importance of reducing greenhouse gas emissions and of reducing energy consumption.

“Human activity is largely responsible for the changes in climate that we’re experiencing,” said Hobbs. “That isn’t a political position, and it’s not a religious position. It’s common sense, with scientific data to back it up. One of the posters I saw on the march that really struck home with me said ‘There is No Planet B.’ This is the only planet we have, and we have to do what we can to protect it.”

Electric Vehicle Day was an interesting event. If you missed the event on May 20th you missed some great information on electric cars. There were 5 different types of electric vehicles at the HOI Sierra meeting at Forest Park Nature Center. We had owners bring in their Leaf’s, Ford C-Max, Mitsubishi, and two Volts. The Volts were brought in by East Peoria Green members Bob Jorgensen and Martin Hobbs. Those who attended had the chance to ask questions, sit in the vehicles and get a feel for them and even go for a test drive. East Peoria Green member, Lori Wolf, drove 3 of the five different EV’s. After the hands on examinations in the parking lot we all went to the HOI Sierra meeting. Each driver spoke for between 5 and 10 minutes about the positives and negatives of their EV’s. By the time the evening was over we all had learned a great deal about EV’s in general and the specific characteristics of five types of electric vehicles. If you are interested in learning about EV’s contact Bob Jorgensen. 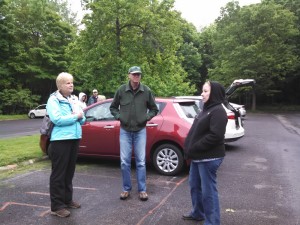 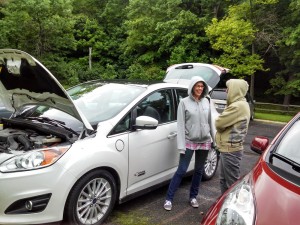 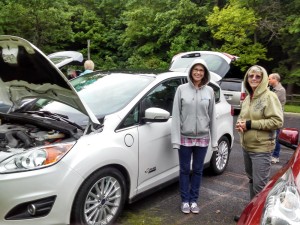 Rocky Glen is Peoria’s newest park, a natural area with unique geological beauty, a fascinating human history, and a very special combination of plant communities. A non-profit group, Friends of Rocky Glen (FORG), mantains a website and offers free guided tours every month to showcase this truly awesome park. Visit www.friendsofrockyglen.org, for lots of pictures, information and a full calendar listing of the hikes and what to wear. This is a moderately strenuous hike that can be done by anyone who can walk the total distance of about 1 mile.

The story of the people of Rocky Glen includes the hundreds of carvings on the soft sandstone walls. The oldest carved date is 1880, the youngest markings are not carvings at all but spray paint from young picnic fools.

Coal mining first brought the European people to Kickapoo Creek, and the now abandoned coal mine entrance that  hikers pass enroute to the spectacular box canyon once connected over 50 miles of underground tunnel, all four feet high following the Pennsylvania coal seam.

I highly recommend the hike and suggest you look at the website for more information and a possible guided tour. 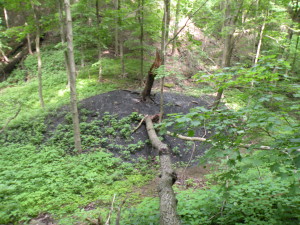 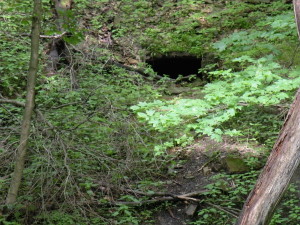 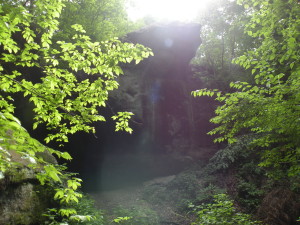 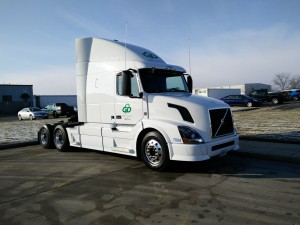 G&D Integrated, a provider of transportation and logistics services based in Morton, has recently taken a large step toward improving their carbon foot print. They will be purchasing up to 94 new trucks within the year.

The new fleet will consist of Volvo’s with the XE package (exceptional efficiency), one of the highest rated trucks on the market. They are equipped with a full aero package and aluminum wheels, to help with air flow and weight. They also have an on board generator, this allows the driver, when in the sleeper birth, to run the thermostatically controlled generator for heat and air conditioning without idling the truck, saving fuel.   Idling the truck burns 1 gallon per hour of fuel, where the generator only uses 1 pint per hour, 1/8 the amount. In addition they are equipped with an automatic I shift averaging 7 miles per gallon, over the current trucks averaging 5 ½ miles per gallon. It doesn’t sound like a lot but when you consider G&D drives over 22 million miles yearly, it adds up fast.

In preparation for purchasing new trucks, G&D did the home work and put 5 of the trucks on the road in their southeast division in Dec of 2012. After seeing the improvement in fuel consumption and performance the decision was made to go ahead with the purchase for the Midwest fleet. Fuel economy is not obtain with lose of power; they have 13 liter engines, with 425 horse power, and 1750 feet of torque.