This story originally appeared in the East Peoria Times Observer

Paying attention to gas prices is not something that three residents really have to worry about.

Jorgensen said he charges his car there about twice a week, while Arnold, the pastor at First United Methodist Church in East Peoria, and Hobbs, who teaches earth science at East Peoria Community High School, use them less frequently.

Because Jorgensen, a member of the East Peoria Green Team, often attends the City Council meetings at the Civic Plaza, he takes advantage of charging his car while doing so.

“I charge as much at the city’s stations as I charge at home,” Jorgensen said.

The charging stations in the Levee District are free to use.

According to Matt Berger, the city’s IT coordinator, the year-to-date report for the charging stations shows that there have neverbeen more than three people using them at once, but there have been 29 unique visitors. Users have saved 98.5 gallons of gas, according to the ChargePoint dashboard.

Arnold said she decided to get a Volt to support the environment and for economic reasons.

“We’ve had substantial savings. We had a gas guzzler that we traded for it and we’ve saved over $200 a month in gasoline costs alone. We have not seen any significant increase in our electric at home,” she said.

Electric cars have an electric motor but a gas generator, Hobbs said. The motorist can switch between the two, or if the electricity depletes, the car will automatically switch to gas.

The Volt has a computerized dashboard and through OnStar communicates with Chevy about the vehicle’s performance. Jorgensen said he receives a monthly report from Chevy and he learned that he saved 28 gallons of gas in August.

Hobbs said he purchased his Volt in December 2011. Since that time, he has saved about $4,000 in gas over his Honda Civic.

The biggest maintenance for the vehicle is having the tires rotated, Hobbs said.

The vehicles come with a plug in for a standard wall outlet.

“That’s how I use mine. I don’t have a 220. I just plug in to my garage plug in every night,” Arnold said, adding that the car can be plugged into any outlet anywhere.

“So if you went on vacation, like if you went to a camp, you can just plug it in there,” she said.

It takes Arnold about 10 to 12 hours to fully charge her car.

Hobbs pays attention to when it’s cheapest to charge the car.

“I pay an hourly rate for my electricity so I charge off peak. I pay about 2 cents a kilowatt hours,” Hobbs said. “Earlier this summer it was free for one hour.”

If he is charging his car during the day, Hobbs, of Eureka, can also use some of the energy from his solar panels. Hobbs, who charges his car using the 220 volt option, said a full charge takes about three-and-half hours.

Still, the trio said it’s worth the purchase.

Arnold said the sticker price for her vehicle was $41,000, but she paid less than that. Plus, she said she is going to get a $7,500 rebate for purchasing an electric car.

Hobbs said he purchased the electric car when it was first released in the state in 2011.

“I paid $500 over the (manufacturer’s retail price). Now I’ve heard you can pretty much get below that,” he said.

According to chevrolet.com, a 2015 Chevy Volt is listed at $34,995. The Volt has many bells and whistles. Arnold said she likes the fact that she can start her car from her phone.

“There’s a reason it’s the No. 1 rated car in America as far as customer satisfaction,” Hobbs said.

Some may think an electric car would not have any pickup, but Hobbs said that is not the case.

“Most people think of it as a golf cart or something, but it has 273 pounds of full torque which is like a strong V6,” Hobbs said. “It’s got everything any other car would have.”

“I had to watch it on the interstate because you can get up into the 70s even before you realize it,” Arnold said.

Arnold said her family will always own a hybrid vehicle.

Hobbs and Jorgensen said they plan to stick with Volts in the future unless something even more energy efficient comes along.

“This is the first cool car I’ve had. I’ve never had people come up to me and talk about my car. I like being a celebrity that way,” Arnold said.

“I also like that they’re made in America,” Jorgensen said. 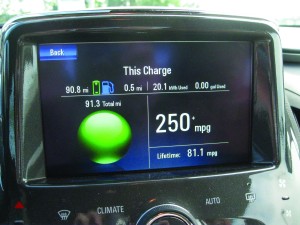 The dashboard of Bob Jorgensen’s Chevy Volt shows the charge information for the vehicle. Jeanette Kendall/TimesNewspapers 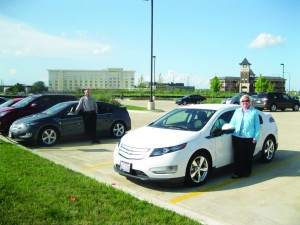 Mary Arnold of East Peoria and Martin Hobbs of Eureka stand by their electric cars in the parking lot at the Fondulac District Library. Hobbs has his car plugged into the charging station. Jeanette Kendall/ TimesNewspapers